This article first appeared in the June/July 2016 issue of Lighting Art & Science for International Designers, published by RALA.

Mesh networking is a powerful way to route data. Range is extended by allowing data to hop node to node and reliability is increased by “self-healing,” the ability to create alternate paths when one node fails or a connection is lost.

One popular mesh networking protocol is ZigBee, which is specifically designed for low-data rate, low-power applications and low power consumption allowing batteries to last for longer. ZigBee is used for monitoring and control applications. This paper presents a review on ZigBee device types, structure and use in automation and the lighting control applications.

Introduction
As mentioned in the International Energy Agency (IEA) Annex 31 [1], energy is the single most important parameter to consider when assessing the impacts of technical systems on the environment. Energy related emissions are responsible for approximately 80% of air emissions and central to the most serious global environmental impacts and hazards, including climate change, acid deposition, smog and particulates. Lighting is the second largest electrical load in offices but the cost of lighting energy consumption remains low when compared with personnel costs. Thus, lighting’s energy saving potential is often neglected. According to the IEA study global grid-based electricity consumption for lighting was about 2,650 TWh in 2005, which was an equivalent of 19% of total global electricity consumption. European office buildings dedicate about 50% of their electricity for lighting, whereas the share of electricity for lighting is around 20-30% in hospitals, 15% in factories, 10-15% in schools and 10% in residential buildings.

Intelligent lighting control and energy management system could be one way for saving energy, particularly in public lighting systems. It aims at remote ON/OFF/DIM of lights that can save energy costs by 40% and maintenance costs by 50% and increases the life of lamp by 30% [2].

The objective of such a system is to provide visual comfort; minimise energy consumption; and a quality of the work environment. The lighting control system is very dependent on the installation regarding location, operation, complexity, etc.

Converting to high efficiency sources and luminaires, combined with energy efficient lighting control system has proven to be effective in reducing energy consumption. Ideal lighting control systems have the following abilities to:
• handle the most efficient lamps, such as fluorescent, compact fluorescent and LED;
• turn lights on/off and dim;
• connect to different kinds of sensors, such as occupancy and photocells;
• handle time scheduling;
• interact with other systems, such as cameras, HVAC and city/building systems;
• be user friendly for operation and programming; and
• be flexible with respect to complexity and price.

Need of low power and low latency wireless networks
There are multitude of standards that address mid to high data rates for voice, PC LANS, video etc. However, before ZigBee there hasn’t been a wireless network standard for control devices; sensors and control don’t need high bandwidths but they do need low latency and very low energy consumption for long battery life and for large devices arrays.

ZigBee is the only standards based wireless technology designed to address the unique needs of low-cost, low-power wireless and control networks in just about any market. ZigBee also connects the widest variety of devices into easy-to-use networks. It is a set of specifications for wireless personal space networking (WPAN) using devices that have low data rates, consume very low power and have long battery life. Its wireless mesh networking, can provide high reliability and more extensive range. ZigBee chip vendors sell integrated radio and microcontrollers with between 60KB and 256KB flash memory [3].

ZigBee device types
The ZigBee Protocol [4] defines three types of devices:
• Coordinator: the most capable device, the coordinator forms the root of the network tree and might bridge to other networks. There is one ZigBee coordinator in each network and stores information about the network, including acting as the trust centre and repository for security keys.
• Router: as well as running an application function, a router can act as an intermediate router, passing on data from other devices.
• End device: contains just enough functionality to talk to the parent node; it cannot relay data from other devices. This relationship allows the node to be asleep a significant amount of the time thereby giving long battery life. An end device requires the least amount of memory and can be relatively inexpensive.

Zigbee topologies
Topology refers to the configuration of the hardware devices that makeup a network and how data is transmitted through that configuration. ZigBee networks can have three topologies: star, tree or mesh, illustrated in Figure 2 and described below:
• Star topology: in this topology the central coordinator node starts and maintains the network. Every other device can only communicate with and through the coordinator.
• Tree topology: this topology has a “top” node with a branch/leaf structure below to reach its destination; messages travel up and down the tree.
• Mesh topology: this topology has a tree-like structure in which some branches are directly linked; messages can travel across the tree when a suitable route is available.

ZigBee protocol stack
ZigBee builds upon the physical layer and media access control defined in IEEE standard 802.15.4 for low-rate WPANs. The specification goes on to complete the standard by adding four main components: network layer, application layer, ZigBee device objects (ZDOs) and manufacturer-defined application objects that allow for customisation and favour total integration. Beside adding two high-level network layers to the underlying structure, the most significant improvement is the introduction of ZDOs. These are responsible for a number of tasks, which include keeping of device roles, management of requests to join a network, device discovery and security. 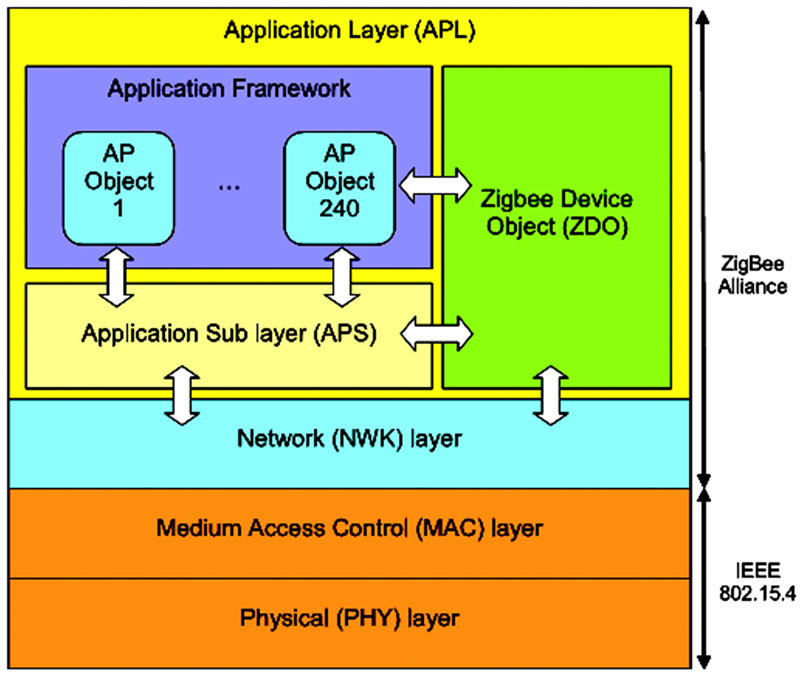 ZigBee characteristics
These include:
• Low battery consumption. A ZigBee end device should operate for months or even years without needing its battery replaced.
• Low cost.
• Low data rate. The maximum data rate for a ZigBee device is 250Kbps.
• Easy implementation.
• Supports up to 65,000 nodes connected in a network.
• ZigBee can automatically establish its network.
• ZigBee uses small packets compared with WiFi and Bluetooth.

Table 1 shows a comparison of ZigBee characteristics with those of Wi-Fi and Bluetooth.

Of the three wireless networks under comparison, ZigBee is the only one that offers mesh topology. In addition, a ZigBee end device can be in sleep mode and still keep its association with its network. ZigBee is a more sophisticated network than either Bluetooth or WiFi.

Conclusions
The increasing need to reduce energy consumption by managing its use is as important with lighting as it is to heating/cooling and power for other equipment, whether in home, office or industry. While users can be encouraged to conserve energy by switching off lights when they are not needed, without the deployment of automatic controls the full benefits are unlikely to be realised. Sensors for motion detection and monitoring ambient light levels, combined with timers, programmers and manual/remote controls, provide the tools for the job but connecting them all together can be a challenge. This is where wireless interfaces provide an ideal solution, reducing the complexity, cost and timescales of implementing a control network and providing flexibility for future changes. However, compatibility between devices and products from different manufacturers is vital, so proprietary networks are not the answer. Instead, standards such as ZigBee are needed to ensure interoperability. As this article has shown, ZigBee offers a range of benefits and highly integrated, inexpensive solutions are available from a range of leading manufacturers.